Oshin Siao Bhatt, a researcher and writer from New Delhi, India with a background in Sociology and Social Anthropology, currently pursuing a Master at the Critical Inquiry Lab at The Design Academy Eindhoven, reflecting on the second Whataboutery of ‘This is an Intervention’. 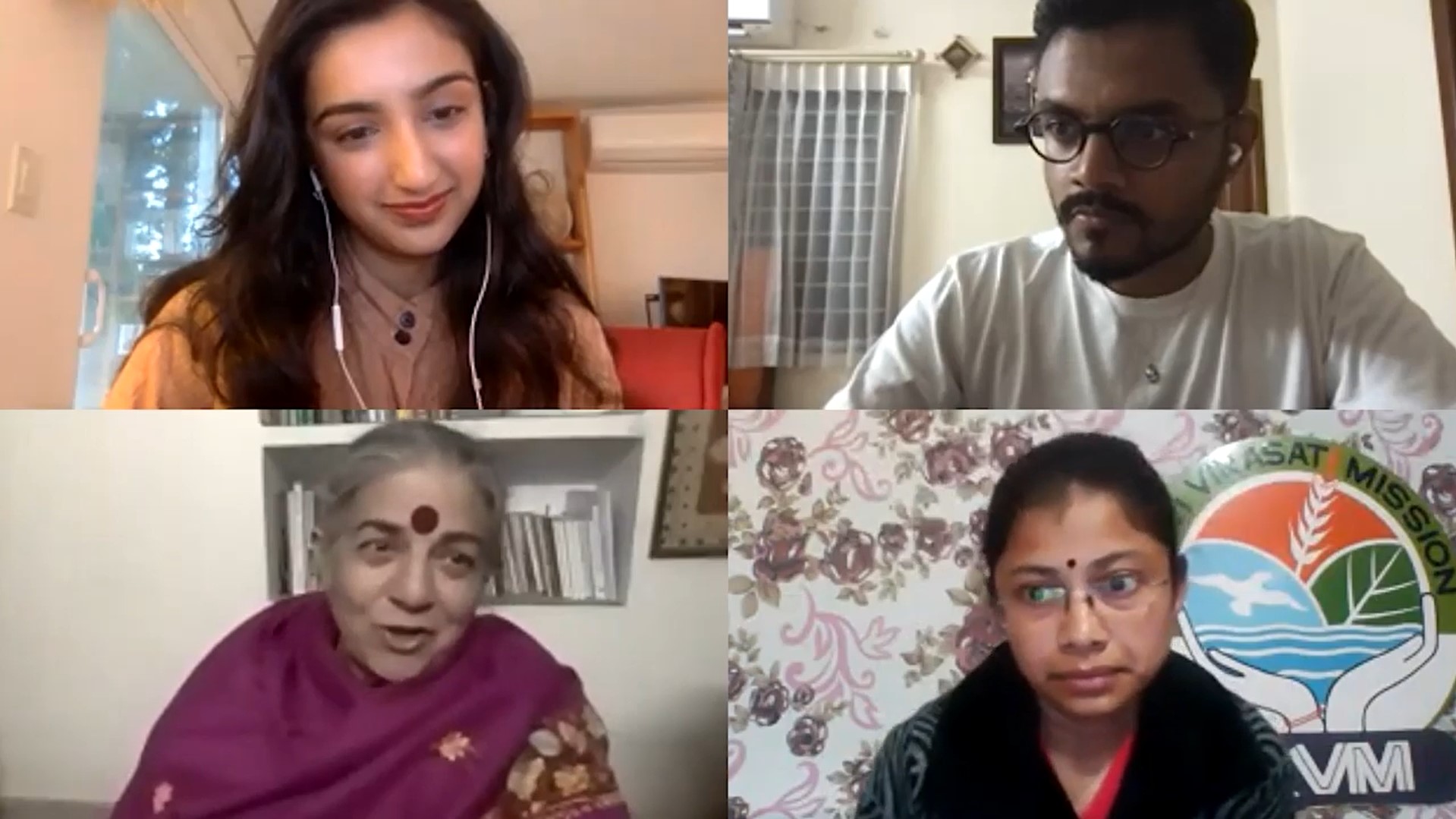 The second edition of the Whataboutery sessions held by State of Fashion brought on board Dr. Vandana Shiva, Nishanth Chopra (Oshadi Collective), and Rupsi Garg (Kheti Virasat Mission), to discuss the impact of colonization on land and labour within the Indian subcontinent, moderated by Indian-American sustainable fashion leader Aditi Mayer. Mayer eloquently led the exchange,
allowing the diverse perspectives brought in by the three panellists to illustrate the ways in which issues of land, labour, sustainability, and culture are intimately tied to the fashion industry that thrives on colonial practices and institutions. The panel brought to the fore the continual exploitation and extraction of natural as well as human resources with direct roots in processes of colonization which, far from being abstractions of the past, are very much extant in India today.

Of Protests and (Green) Revolutions

The discussion centering issues of land, labour, and farmer livelihoods seemed timely, also, in light of the farmer protests that have mobilised support across India, in opposition to the new ‘Farm Laws’ that were passed in parliament this September. Dr. Shiva has argued that the laws, which will not only determine the production and prices of food but also the livelihoods of farmers and the management of soils, biodiversity and natural resources, could dismantle India’s biodiversity-based tradition of self-sufficiency. It may also destroy a regulatory system, in place for roughly 70 years, protecting small farmers and the food sovereignty of the country. The context of these protests moreover, in addition to specific questions of the three bills, cannot be divorced from the larger theme of colonization. In the late 1960s the northern state of Punjab, now at the helm of the farmer protests, became the main beneficiary of the Green Revolution, which introduced high-yielding varieties of wheat and paddy across India. The agricultural marketing system that was put in place in the region, with an open-ended procurement scheme under which any amount of grain brought to the market would be purchased by the government at Minimum Support Price (MSP), ensured farmers a return on their investment. While these assurances will now be undermined under the new laws, the Green Revolution itself was a remnant of colonial systems and power structures. Colonialism and the annexation by the East India Company, not only subdued India’s textile economy but also represented what Dr. Shiva has called ‘a major land grab’, turning the region into an exporter of raw materials rather than a producer of goods and food supplies. The legacy of colonial rule, moreover, was the rise of nation-states with a unified, western-centric notion of modernity and development.

Post-independence India, in this regard, was no different. The history of Indian modernity is intertwined with colonial ideas, education, and thought. Partha Chatterji has argued that India’s critique towards anticolonialism often reflects the norms and values of the colonizer; reproducing the systemic oppression rampant during the colonial period. The nation-building efforts of the independent Indian state, moreover, were also based upon western education and ideas; such that science and technology took primacy in the construction of not only industry, but also agriculture. The Green Revolution, then, became one such instance where the state sought to break away from ‘traditional, primitive, and backward’ farming practices and introduce technological advancements, which would nudge Indian agriculture on a path of “progress”.

While the narrative of innovation and progress ran rampant across developing nations, Dr. Vandana Shiva has pointed out the increase in poverty that accompanied the efforts towards rapid industrialization. The Green Revolution, she has argued, was directly responsible for the water crisis, rising prices, farmer suicides, and eventually the ethnic violence, which followed in Punjab in 1984. Furthermore, these events also point to forces of neo-colonization, which played out in the activities of chemical companies like Monsanto seeking to control not only the market for pesticides and chemical fertilizers, but also the seeds that were genetically modified and patented to prevent seed saving, under the WTO intellectual property rights agreement. In preventing farmers, once again, from being in control of their produce, this agreement was reminiscent of colonial practices, which constructed a rupture in the relationship between the land and labour. The farmer debts created by this system, was only one side of the story. With the increase in BT crops and monoculture, regenerative and biodiversity-based farming practices also steadily declined.

Towards Sustenance, Dignity, and Postcolonial Realities

The notion of India being a predominantly agricultural country with a village-based economy has dominated anthropology for several decades. While the urban population, now, is steadily increasing under the influence of market driven aspirations and realities, the agricultural heritage is one that is deeply connected to the crafts, cultures, and livelihoods of the subcontinent. Rupsi Garg speaks about the program run by Kheti Virasat Mission under the umbrella of Trinjan, which facilitates the procurement, spinning, and weaving of organic cotton to promote the revival of organic farming and traditional forms of crafts associated with it. In doing so, she argues, the organisation seeks not only to provide employment but also to create a platform for the community to gather and preserve ‘the warp and weft of society’. Inspired by Mohandas Gandhi’s ideas of a ‘Village Republic’, Kheti Virasat Mission hopes to advance self-sufficiency through local production and local consumption.
In tackling the question of colonization, the glaring impact on local and subsistence economies cannot be overlooked. The loss of traditional farming methods, cultures of crafts, and even socio-cultural ties associated with these activities, can be traced back to the colonial rule as well as to the neo-colonial forces prevalent today in global markets, consumer culture, and fast fashion. Initiatives such as Kheti Virasat Mission, then, shine light upon the need to undertake decolonial approaches that take into account the larger ecosystems within which local economies and cultures can thrive. What this program also brings to the fore is the question of value, both economic and cultural, and labour, when considering issues of consumption. While sustainable consumption is steadily becoming a trend within the world of fashion, it is necessary to ensure that the conversation is driven by concerns around people, cultures, and communities as much as questions around the environment.

In this regard, then, it is also vital to take into account the complex socio-economic reasons that farmers and artisans alike might choose to cater to a commercial market, in addition to renewing traditional forms of exchanges. Given the postcolonial realities within which these communities exist, today, it is immanent that a decolonial approach centers the needs, aspirations, and realities of those who are at the forefront of cultural, economic, and social production. The Oshadi Collective, run by Nishant Chopra, becomes a telling example of such a relationship, wherein a regenerative approach to growing cotton, woven by local weavers, culminates in a fashion supply chain that ensures fair prices and sustainable processes for the workers. This notion of sustainability takes into account the livelihoods, cultures, and needs of the communities involved, such that they can be self-reliant both within their private and public lives. Decoloniality, in this regard, cannot be divorced from the ideas of dignity of labour and regard for personal and socio-economic aspirations.

While the global market economy and practices rooted in colonial institutions and ideas are deeply embedded within the Indian subcontinent, efforts such as the ones discussed in this panel are steadily furthering the conversation around ensuring equitable and dignified working conditions for those involved in production processes. The diversity of approaches and paradigms towards this issue, however, is also a clear reminder of the diversity of the nation itself. Conversations around decolonisation within the Indian subcontinent, then, must be cognizant of the stark inequalities, differences and stratifications that exist within India - be it in terms of caste, class, region, or religion. The role played by the colonial rule in invigorating these divides cannot be denied. However, any effort to move away from colonial practices must not singularly rely on harking back to the past. Drawing on Homi Bhabha’s notion of ‘Third Space’, it becomes clear that the very idea of a unified, originary past is derived from the colonial notion of a homogenous, serialized time. It is necessary, therefore, to be vary of oversimplifications and generic trends when seeking to move away from colonial practices.

The question of tradition vs. modernity is another pertinent issue that begs addressing, when undertaking decolonial approaches. It is useful, in this regard, to bring forth postcolonial scholar Sudipta Kaviraj’s argument wherein he interprets ‘post-colonial’ to imply the existence of several characteristics possessed by India today, which would not have existed in the absence of a colonial regime. While this argument in no way lauds the history and presence of colonialism in the country, it recognises the need to take into account the changes that have occurred in the two centuries since its presence. Keeping this in mind, it is worth arguing for a decolonial stance that does not romanticize the past but draws, instead, upon the lessons embedded in traditional knowledge and
oral narratives, which colonial and global markets seek to erase. While India still has a long way to go in dismantling the colonial legacy and the power imbalance sthat come with it, the efforts of grassroots organisations in taking the lead in this endeavour is definitely commendable.