The fashion of the future consists of unlimited expression of identity if we have to believe the next generation of fashion designers.

Between all the seasoned fashion houses, Amsterdam Fashion Week also made space for new talent at the latest edition in September. Two of the chosen ones were Roxane Mbanga and Darwin Winklaar. It wouldn't do them justice to describe them as fashion designers. With their presentation they have proven themselves as versatile artists and storytellers within fashion.

The two earned their place thanks to Lichting: a competition in which the best recently graduated designer from the Dutch fashion academies is chosen. Mbanga and Winklaar both chose to incorporate their designs into a performance. They both take us on a journey through different aspects of their childhood and cultural background. Mbanga found her inspiration in Central and West Africa and hopes with her performance to show that clothing can help women feel at home in their own bodies. The performance of Winkelaar consisted of various aspects of his youth in Aruba, which led to an ode to his childhood but also a critical look at the perception of masculinity in his culture.

In the performances of both we see that it seems to be more about the story they strive to tell than about selling clothes. The clothing has more of a supporting role in telling the story. 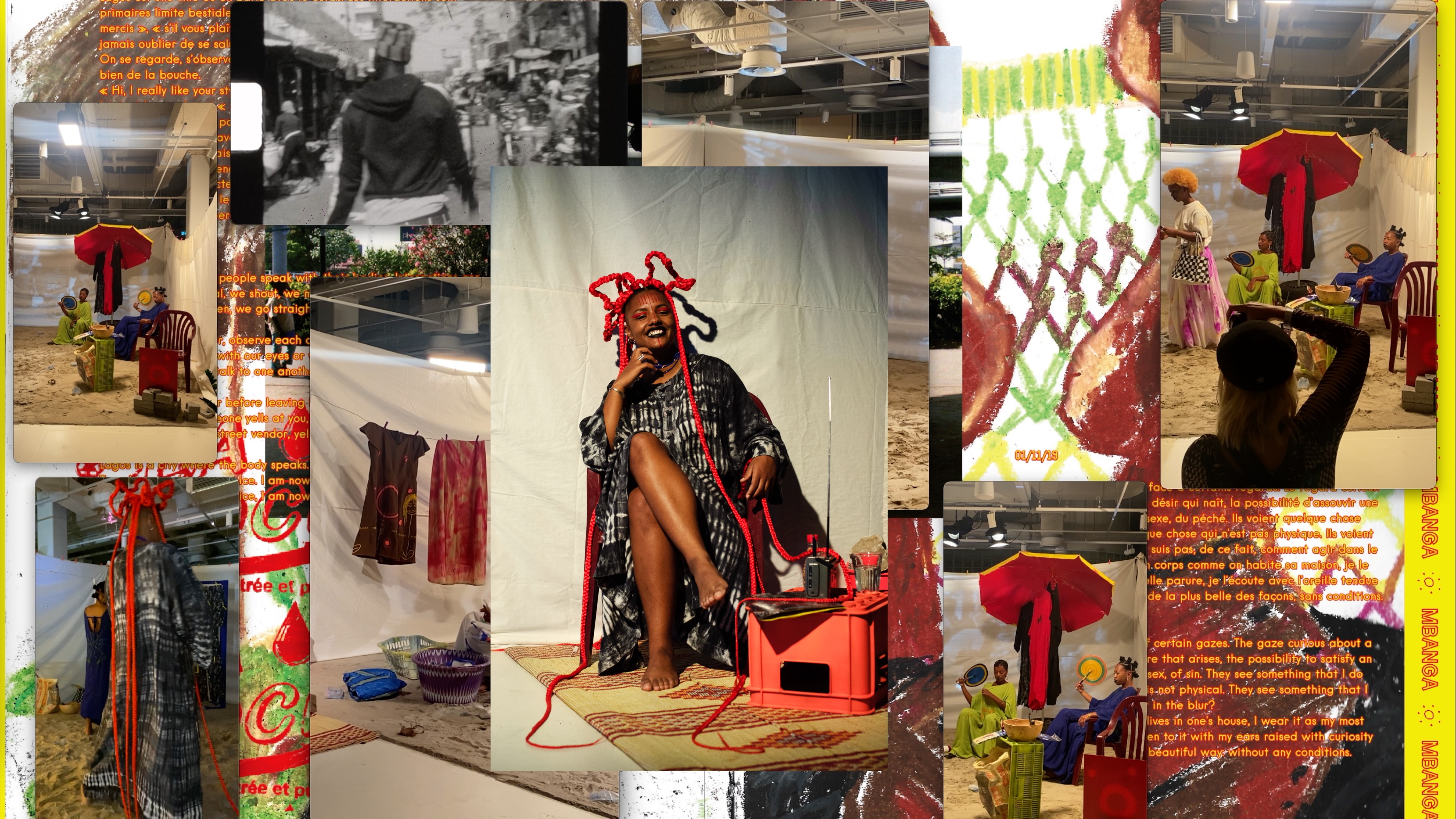 With Histoires de femmes Roxane Mbanga took us on a journey to the places she calls home. The performance was a mixture of theatrical performances by models, audio and a beamer projection with images of different sceneries and cities of the world and places she refers to as home.

Histoires de femmes is based on reminiscences of her memories and the clothing the models in the performance wore, is influenced by Central and West African fashion.

She takes us on this journey by an amazing set in which models carry out activities that are characteristic of women living in those places. In the performance we have seen women having conversations with each other, braiding their hair, cooking, hanging clothing, talking about their insecurities and future plans, but also having discussions and putting each other to the test.

In her memories she takes us to different cities, activities of the women in the streets, to the way they inhabit the public space. Entrepreneurial women, elegant, ambitious women. She tells us how women occupy the cities, how they experience the street through women’s bodies. Her thoughts were supported by voice memos and audio fragments of the streets of Lagos, Dakar and Paris, among others.

In the voice memos we also heard encouraging texts for women in which she indicates, for example, how to move in Lagos. And how sometimes you have to raise your voice to get things done. She also highlights differences between Western and African cultures. Mbanga indicates that one of the differences is how men speak to women. And that women have different experiences walking alone in the streets of Dakar compared to walking alone in Paris.

The multimedia presentation ensures that you are completely taken into her feelings, and into her world of femininity, empowerment and the different worlds in which she moves.

Darwin really wants to take you into his world. A multifaceted world full of spectacle, adventure and emotions. The performance started with an energetic and powerful performance which was a mixture of dance and vocals. The interesting thing about this performance was that he himself was the center of attention and participated in the performance consisting of singing and dancing. Winklaar was accompanied by five dancers dressed in white quilted boiler suits and mesh gloves, and hand-embroidered flower detailing. He raps and sang a mixture of Spanish and Papiamento about his native island of Aruba, about his youth, his memories, his family, about joy and sorrow.

Darwin creates space for queerness and the fusion of masculinity and femininity in the heteronormative Caribbean urban culture. Even though you don't understand the language he sings in, you feel the pain he has suffered with his queer identity in his upbringing. But also, the exuberant colorful expression of his culture and the sense of togetherness that comes with it.

He knows how to convey the story with different emotions. The light and sound constantly adapt so that you are completely taken into it. Cultural Caribbean music, hip hop, rap & pop influences all come together in an exciting melting pot.

This performance got me thinking: is the fashion of the future much more about the story of the designer than about the clothes? It seemed very logical that Winklaar himself was the center of attention and did everything himself, from designing to presenting. After all, who better to tell and convey the story to the public than the designer himself? 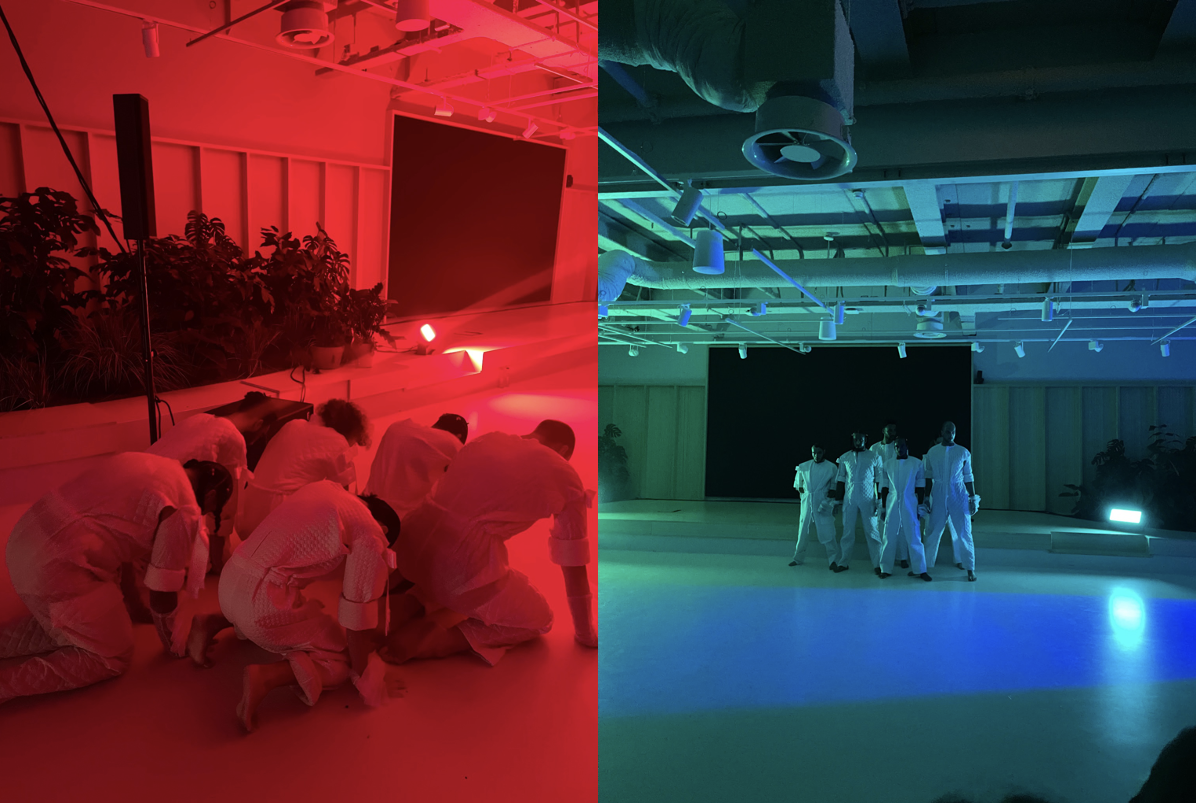