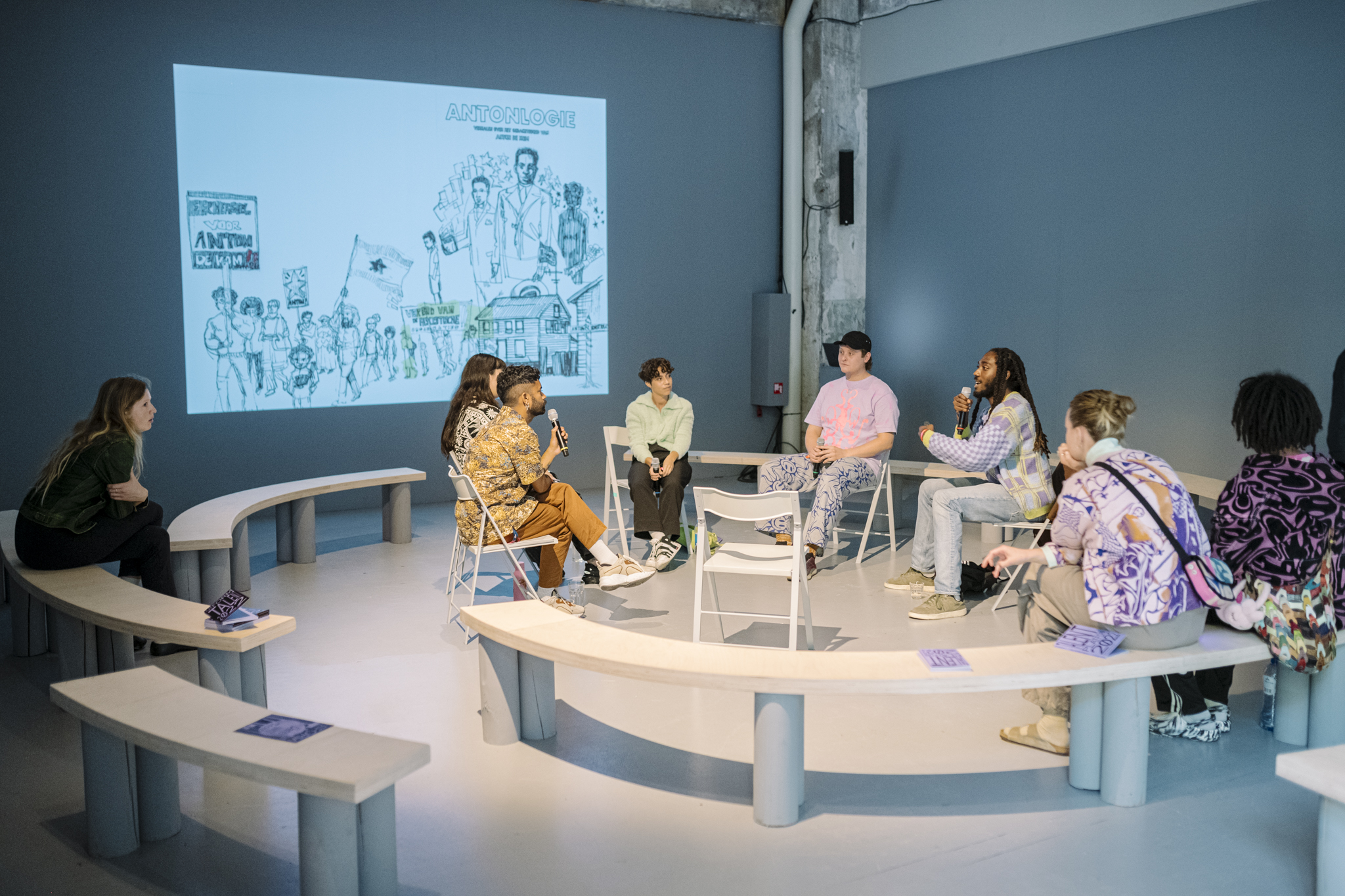 The personal as a becoming — discovering, locating, re-locating…

To be inarticulate — a sense of naïveté, the notion of utopia, the poetics of fiction…

I hurried to jot down these fragments of observation in my Notes app as the dim-purple light bathed the circle of six chairs in front of me with an intimate and dreamy touch. Just ended here was the fishbowl session “Power to the Personal,” the final chapter of the Dancing with Trouble series at the 2022 Dutch Design Week. The week-long programme featured emerging talents supported by the Creative Industries Fund NL, with their one-minute film portraits looping on the LED screens at the back side of the MU Hybrid Art House in Eindhoven. Next to them, curved benches were arranged to form an open ring, giving the chairs in the middle a loose and gentle hug. Here, a series of performances and talks were compiled to facilitate exchanges between the talents and the public. Moving through the themes of bodies, communities, feelings and landscapes, the last session landed on the role of personal narratives in transforming design practices.

At first glance, bringing the personal to one’s artistic practice seems an innate move, what designers and makers resort to for defining themselves. The one-hour conversation between participating artists Leyla-Nour Benouniche, Rossel Chaslie, Tobie van Putten and moderators Manique Hendricks and Sharvin Ramjan nuanced that assumption. Telling the personal story proves a delicate and often-times obscure craft; its intricacy is where its magic lies.

Into the Fictional Space

The starting point of the session was a personal sharing of the artists’ respective design practices. Video producer and illustrator Leyla-Nour Benouniche discussed their pilot project Captain Clueless, an emotional space odyssey, which was also screened before the talk. The multimedial video series revolves around the journey of an alien to different planets. One day, the alien enters a very hot planet and experiences attacks from the locals. Fortunately, they are saved by a kind creature and brought back to the spaceship safely. In the cabin, the two characters start to get to know each other and share their personal struggles. One dressed up in a long blue-fur coat with white cloak, the other in a tight orange-and-white bodysuit, the vibrant costumes carve out a heartening space for difficult dialogues to unfold. The design is based on Leyla’s research into African mythologies and children’s cartoons, combined with visual codes in queer and diasporic communities. “I realized that getting dressed up and having a sense of distance from the narrative somehow makes it lighter when dealing with difficult topics,” they said, “it helps you go deeper for a bit longer.”

Coming from the field of contemporary art and digital culture, curator and moderator of the session Manique Hendricks further described these costumes as taking on an almost ‘drag-like’ feel. I like that observation from the gender terrain. For me, this fictional space of the Clueless Captain is also a queer one, addressing the (lack of attention to) mental distress facing young adults from a specific community. By doing the imagining, the dazzling world of the spaceship cabin realizes a unique space of queerness. A queer space that is still accessible, relatable, and lovable: with a tone of playfulness, the characters talk about their anxieties, moments of exhaustion and mental distress, but also about the rhythmic power of breathing and how movement and dance acts as a guidance of thinking. In a restful way, these dialogues brought back my own childhood memories at the breakfast table; the warmth and naïveté of that recall drew me closer to the characters, sharing their struggles as well as joys. 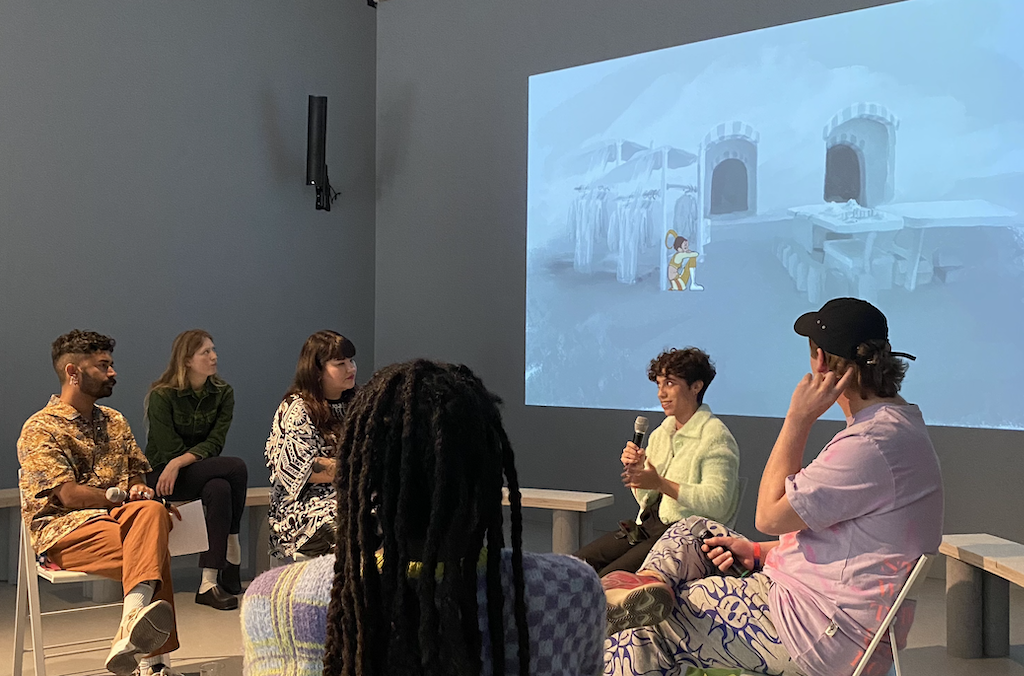 Leyla’s resort to the imaginative finds its echo in the works of Rossel Chaslie, who showed the audience his sketchbooks of drawings over the past ten years. For Rossel, the drawings constitute his way of doing research, a process that often matters more than the eventual product. This is the case of his illustration for the cover of Antonlogie: verhalen over het gedachtegoed van Anton de Kom, a collection of stories about the anti-colonial thinker. On the right corner of the illustration, Rossel reimagines the house of Anton de Kom in Suriname, a monumental site marking the beginning of a series of movements and protests. Notably, the sketch was made before his research trip to Suriname where he visited the site and saw the lack of heritage care it has received. Still, Rossel decided to keep this imagined version of the house. “Truth is sometimes too hard for us. I want to draw the way we feel we deserve, somewhere we haven’t reached yet.” Through this imaginary landscape, Rossel’s illustration brings forth a language of hope, which can be so often exhausted by the solitary focus on violence whenever we talk about colonial dissent. Along with that hope is a gesture of speaking back to his personal root, a response to the collective experience of diaspora.

This act of speaking back does not come off easy. Rossel’s journey to the personal is an exploration with many dwellings and hesitations. At first, he was afraid to make his presence in Suriname. As someone growing up outside the country, he feared that his voice did not have validity in the local community. “It is only later that I realized my perspective and presence there is necessary, that by leaving the place, I learn more about Surinamese history, by leaving the land, I am able to look at it more critically. It is this moving in-between that makes you see both sides.” The liminal position of the borderland thus becomes a gift, allowing Rossel to trust and offer his own perspective, as is embodied in the reimagined house of Anton de Kom.

If Rossel and Leyla’s activation of the personal story draws on modes of fictionalizing, distancing and occupying the liminal space, Tobie van Putten takes the unknowable of the personal as the starting point of his art making. Throughout the conversation, Tobie seemed hesitant to tie the personal to a particular entity, history or location. What he repeatedly touched on, nevertheless, was his intuition for certain visual forms. This results in his experimentation with colors and patterns, layering them on top of each other, merging their presence on the garments with the background, or creating collages whose outcomes surprise himself. From creating the palimpsestic effect in knitting techniques to exploring various ways of printing, Tobie allows surprise to guide him in the creation process.

But is this ease with unknowability always a propitious position in art making? Can it also be dangerous to let personal preferences and subjectivities to lead the creation process? This was the question raised by co-moderator Sharvin Ramjan, also coordinator of the grant programme for Talent Development. Indeed, what we (the recipients of Euro-centric paradigms of knowledge production) take for granted as beautiful shapes, colors or forms might be less universal than we think; they carry the historical weight of a community and civilization. How to reconcile the ethical tension between the subjectivity of the artist and the collective context of a symbol?

The artists offered varying responses and positions. Tobie sees his fabric design as an opening, inviting the people who wear it to develop more colorful views of the world and bring joyful energies to one another: “I am not very much into the symbolics of things. I think of interpretation in associative ways. Most importantly, I want my design to have a world of its own and create joy for people.” The straightforwardness of his answer makes me unsettled as much as fascinated. On the one hand, I wonder if this position suffices to address the complexity of symbols, especially the communities they often concern. After all, attending to the meanings of a pattern is also a gesture of care to the lived experiences behind it. On the other hand, it seems to me that Tobie is searching for a different way of articulating the personal, one that is not bounded by tokenism but foregrounds an emotional thickness. And this does reflect in his designs: with deep colors and prints layering on each other, the original patterns become indecipherable. At the same time, a sense of cheerfulness and connectedness starts to grow between the wearer and their background, the garments and the environment around it. 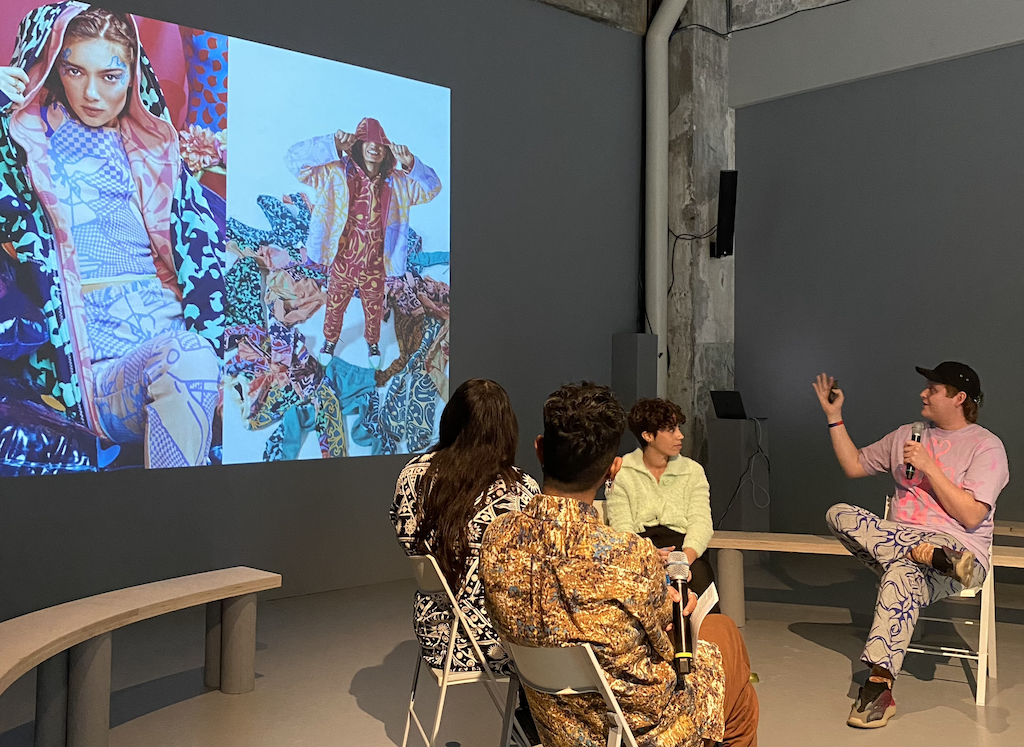 On a similar emotional terrain, Leyla finds the personal and the collective merging at the locus of joy, “one of the goals of my artistic practice is to create a space that is enjoyable, restful and comfortable for everyone. Sometimes that means making the most absurd fluffy stage set to make everyone feel at ease.” This practice of working from and with the community was also central to Rossel’s creation process. The artist considers his sketches and non-linear stories as an extension of the conversations with grass-root organizations and local initiatives both in the Netherlands and in Suriname. “My personal voice is not a superpower, but a merit. The task is about how to take my work as a state of normalcy, while giving room to others.” One thing is certain: the boundaries between the personal voice and the communal bearing remain fuzzy, and it takes hard work for the artists to find their own reconciliation.

In turn, the ongoing negotiation with oneself generates a different kind of activism that is gentle, slow, and reparative. It starts from attending to everyday pragmatics and the subtleties of our emotions. It keeps the personal as a site of trouble, but also embrace it with a thrust of softness. As echoed by Rossel towards the end of the conversation: to unleash the power of the personal is to perform two crafts at the same time, that of fighting the world, and of healing it.

Haitian Ma (she/her) is a writer, translator, and researcher on media and performance art. Her interests span across the poetics of untranslatability, absence and ephemera. Currently, Haitian is working on reconstructing dysfunctional early net artworks at the Media Art Platform LIMA, and doing independent research on the history of outer space with a focus on Indian Astroculture. 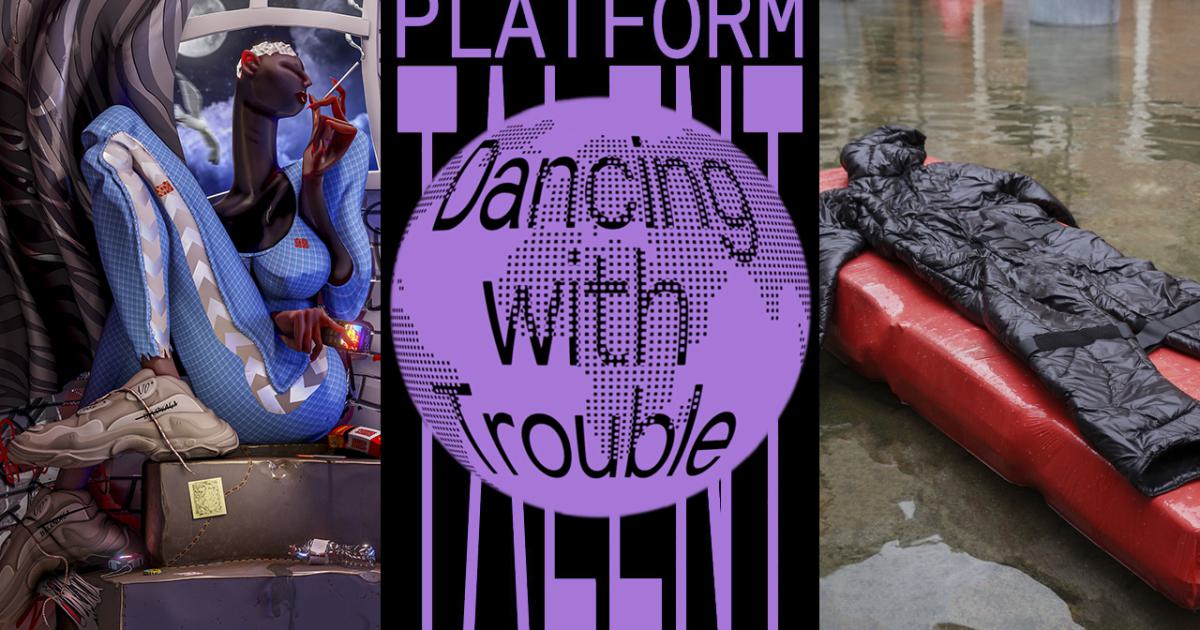 Every year, thanks to a grant from the Stimuleringsfonds Creatieve Industrie, up-and-coming design talents get the chance to develop to their full artistic and professional potential.

During Dutch Design Week, the 2022 crop personally presented themselves to the public with performances, lectures, talks and workshops through the Dancing with Trouble programme from 23 to 30 October the space in MU Hybrid Art House.

Discover all the talents
https://talent.stimuleringsfonds.nl